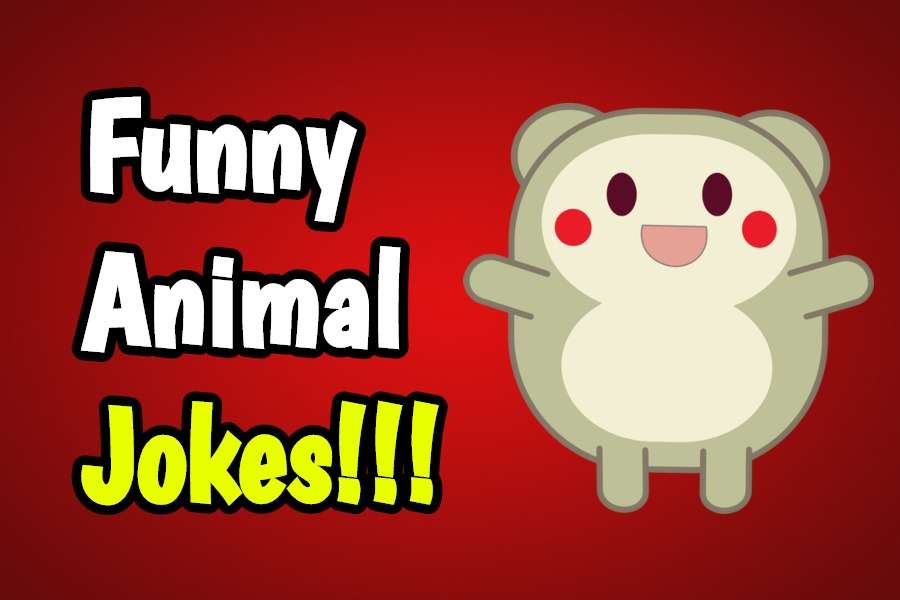 Once there were three turtles. One day they decided to go on a picnic…

When they got there, they realized they had forgotten the water. The youngest turtle said he would go home and get it if they wouldn’t eat the sandwiches until he got back. A week went by, then a month, finally a year, when the two turtles said, “Oh, come on, let’s eat the sandwiches.”

Suddenly the little turtle popped up from behind a rock and said, “If you do, I won’t go!” 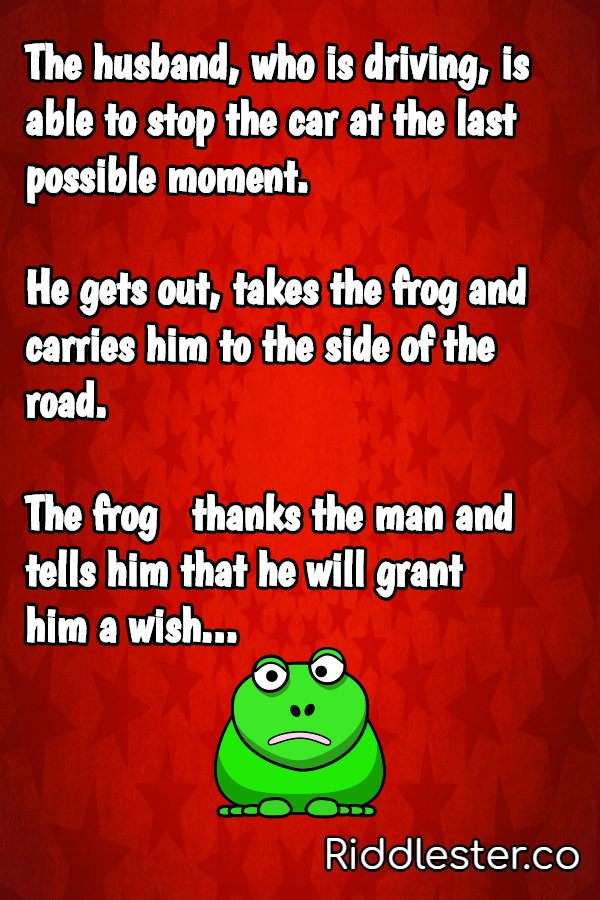 A family is driving in their car on a highway when a frog suddenly crosses the road.

The husband, who is driving, is able to stop the car at the last possible moment.

He gets out, takes the frog and carries him to the side of the road.

The frog  thanks the man and tells him that he will grant him a wish.

The husband says: ”please make my dog win the next dog race.”

The frog asks to look at the dog which jumps out of the car. The frog notices that the dog has only got three legs and tells the man that he thinks it is almost impossible to fulfill his wish and asks that the man will tell him another wish.

The man responds: “Well, then please help that my wife will win the next beauty contest .”

The frog asks him to tell his wife to get out of the car.

Wife comes out of the car and approaches the frog. Then the frog turns to the man and says: “Could I please have another look at the dog?”

A man goes into a bar with a cat sitting on his head.

The barman says, ”Look…I don’t know if you know it but there’s a cat sitting on your head.”

”What of it?” replies the man.”I always wear a cat on my head on a Monday.”

”But today’s Tuesday,” replies the barman.

4.The hunter and the lion

In the middle of a jungle, there was a hunter who was suddenly confronted by a huge  fierce lion.

He attempts to shoot the lion without success, so he turned and ran away as fast as he could.

The hunter ran and ran until he ended up at the edge of a steep cliff. Seeing no way out of his predicament, and with the lion approaching  quickly, the hunter got down on his knees, opened his arms, and prayed to the sky, “Dear God! Please give this lion some religion!” The skies then darkened and there was lightning in the air. Just a few feet short of the hunter, the lion came to an abrupt stop.

Suddenly, the lion looked up into the sky and said, “Thank you, God, for the food I’m about to receive…”.

5.A mouse is taking a shower

How does a mouse feel after it takes a shower?
Squeaky clean.

6.Dog is watching a video

How does a dog stop a video?
He presses the paws button.

They lived in a hole out in the country near a farmhouse.

Father mole poked his head out of the hole and said, “Mmmm, I smell sausage!”

Mother mole poked her head outside the hole and said, “Mmmm, I smell pancakes!”

Baby mole tried to stick his head outside but couldn’t because of the two bigger moles then said, “The only thing I smell is molasses.”

8.A horse is watching a movie

A man in a movie theater notices what looks like a horse sitting next to him.

“Are you a horse?” asked the man, surprised.

“And what are you doing at the movies?”

Then the horse said, “Well, I liked the book.”

9.The blind man and his dog

A blind man walks into a store with his seeing eye dog. All of a sudden, he picks up the leash and begins swinging the dog over his head. The manager runs up to the man and asks, “Sir…what are you doing?”

What do polar bears have for lunch?

What did mama buffalo say when her youngest went off to college?

A man’s big rottweiler has been losing its vision, so the owner brings the dog to the vet.

The veterinarian picks the dog up and says, “I will have to put him down.”

The owner asks, “Why? Because he’s blind?”

13.The difference between a car and a bull

What is the difference between a car and a bull?
A car only has one horn.

“Do you have alligator shoes?”
“Yes, sir. What size does your alligator wear?”

What kind of key opens a banana?
A monkey.

Why are frogs so happy?

Because they eat everything that bugs them.

Three mice were sitting in a bar boasting about their strengths.

The first mouse says: “Mouse traps, Ha! I do pushups with the bar”.

The second mouse pulls a pill from his pocket, swallows it, and says with a grin “Rat Poison”.

The third mouse finishes his drink and starts to leave.

The other two mice say, “Where do you think you’re going?”
“Time to go home and chase the cat”.

A man is walking down the street when he sees an old man with a nice looking dog.

He goes over to the man and asks: ”Does your dog bite?”’

The old man replies: ”Of course not!”.

When the man bends down to stroke the dog it immediately bites his hand.

The man then says ”I thought you said your dog did not bite!”

20.Two turtles and a snail

A snail got beat up pretty badly by two turtles.
At the police station they asked him, “Did you get a good look at the turtles that did this?

The snail replied: “No, it all happened so fast.”

A couple of pigeons made a date to meet on the ledge outside the tenth floor of a skyscraper.

The female was there on time, but the male arrived an hour late.
“Where were you? I was worried sick.” she said.
The male pigeon replied: “It was such nice day, I decided to walk.”

Why do seagulls live by the sea?
Because if they lived by the bay, they would be bagels.

23.Hates to do it’s laundry

What kind of animal hates to do it’s laundry the most?
A leopard because he has so many spots.

What do you call a crocodile with GPS?

A duck walks into a bar and asks, “Got any peanuts?”.

The bartender confused, tells the duck that no, his bar doesn’t serve peanuts.

The duck thanks him and leaves. The next day, the duck returns and says, “Got any peanuts?”.

Again the bartender tells him that, no, the bar does not serve peanuts.

The duck, thanks the bartender and leaves.

The next day, the duck returns once more but before he can say anything, the bartender begins to scream : “Listen here, duck! We do not serve peanuts! If you ever ask for peanuts again, I will nail your duck beak to the bar!”.

The duck then asks, “Got any nails?.”

Angry and confused the bartender says ”No!”.

Then says the duck. “Got any peanuts?”.

How do bees get to school?
By school buzz!

28.A cow went to the cinema

Why did the cow went to the cinema?

29.A cowboy lost his book

A cowboy lost his favorite book while he was mending fences out on the range.

A few days later, a wolf walked up to him carrying the book he lost in its mouth.

The cowboy couldn’t believe his eyes.

He took the book out of the wolf’s mouth, raised his eyes and said, “Thank you God for this miracle!”

“Not a miracle really,” said the wolf, “Your name was written inside the cover.”

Why are teddy bears never hungry?
Because they are always stuffed!

Laugh with Jokes for kids